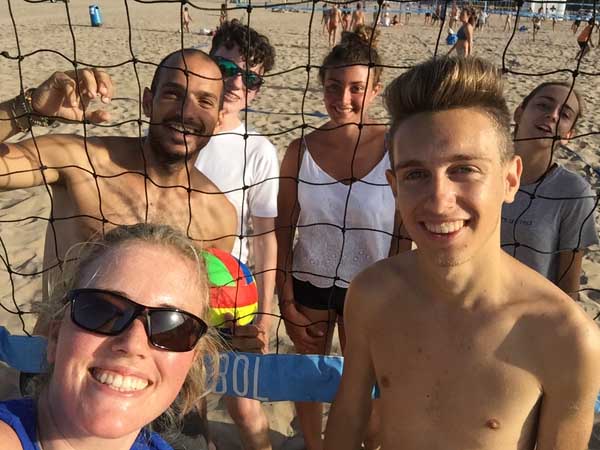 I must say I really enjoy the Spanish classes here! I know it seems mad to ‘enjoy’ being in classes during the summer holidays but they really are good fun! We play games and have conversations and I really think I am learning a lot. I notice myself understanding much more Spanish and it’s kind of cool because some of the students here don’t speak English but do speak some Spanish (like me!) so we can still have a conversation through Spanish.

Today, when classes in the AIP academy were finished, we had lunch and then had free time from 1pm to 5:30pm. Gemma and Conor, along with the girls, headed to the beach where they relaxed on the beach and waited for volleyball to start. I had forgotten my sun cream at home in Ireland so I took the Underground Metro into the city centre to hunt for some sun cream. The metro is a safe, quick, and easy way of navigating the city and escaping the sun. I got an Ice-Cream in McDonalds in the shopping centre in Turía (I know, I know…McDonalds isn’t very Spanish…) and then I went for a walk along the park in the city centre towards the metro station.

The Rio de Valencia is a huge park that was built in the riverbed after it was diverted out of the city following a flood in the 1950’s that claimed many lives. The park is one of my favourite things about Valencia. I rode the metro back to AIP where I met the other students, and we all then headed to the beach with José and began the Volleyball. We all helped to set up three different volleyball ‘courts’ on the beach so there was plenty of space for everyone to play. The girls decided to take a break from volleyball and go for a swim and they watched us while they dried off in the sun. Everyone had a great time at the volleyball and we got to see the beach and its lovely soft golden sand. I’m not exaggerating when I say that…the sand is amazing! During the volleyball we got to know some more Italian, English and Chinese students although I’m not sure who won because we didn’t really keep count!! At 8:30pm, we headed back towards the academy and went home to our families, covered in sand and fit for a feast!