Today the guys had the 6th and final oral class with Ana and after this they had their interviews with Alba, Liam and Ana about their time here in Valencia. They all discussed their favourite parts of the three weeks and their favourite places they went to. They were split up into different interviewing groups and answered all of Ana´s questions. I remember when I did my interview 2 years ago we had to film it over and over again because I couldn´t stop laughing 🙂 I will be interviewed tomorrow again 2 years on so hopefully I´ll be able to concentrate a bit more!

After the interviews, the activity was a game of Volleyball on the beach. Daniel was feeling very tired this evening so thought it would be best to sit this one out. The rest headed down to La Playa Malvarosa for the second last time for a competitive game of volleyball, but nobody managed to keep the score properly so we don´t actually know who won in the end.

After a tough game in the sun, it was time to go home for a well deserved dinner with the host families. 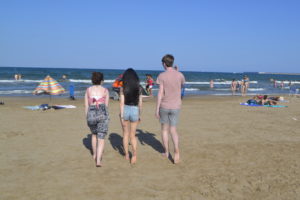