Today we had a nice long gap between classes and activites. We had four hours to relax or do whatever we wanted around the city. I decided to head home for a siesta and for some lunch while the others went into the city to get some lunch and to do a bit of shopping before heading back to Ireland on Sunday.

At 5 pm we all met back up for the activity, which was an Urban Art yincana.  Before we left though, it was one of the students from America’s birthday so there were loads of balloons and a big chocolate cake for everyone to share.

We then got the tram to the beginning of the yincana (kind of like a treasure hunt) and we split into groups of 5/6. We were given a list of 9 murials to find around the city and an hour and a half to do so. We appointed Aoibhín as the selfie taker once again, and Daisy took charge of the directions.

In the end we got it done quite quickly and had it done with almost half an hour to spare but we weren’t quick enough! Daniel’s group were way ahead of us and beat us to it 🙁 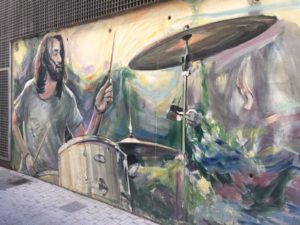 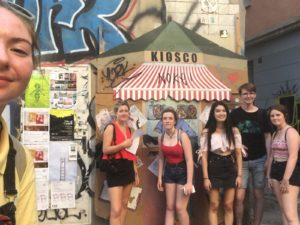