After today’s classes there was no time to waste, we got straight on the bus and headed 2 hours outside the city to the río Cabriel. We headed there to do canyoning -something I had never done before, but Daisy had, and told us all how fun it was. We were really looking forward to it as we could see from last year it seemed to be the top activity of the three weeks.

We were all provided with loads of equipment including thick wetsuits, jackets and helmets. The first task was for everyone to get used to the water temperature, which was freezing in comparison to the 34 degrees outside of the water.  After this, we were taught the positions for the slides and the jumps.

We got started and there was no going back now! Some of the slides were daunting at first but once you watched a few people do it you were fine. Daniel flew ahead fearlessly and did everything first.

After 2 hours of intense canyoning, including jumping off waterfalls, sliding head first down them and swimming against currents we were exhausted!

We quickly changed and got back on the bus to Valencia. We had a quick stop about halfway as everyone had built up a lot of hunger.

In the end we arrived back quite late to Valencia so the host parents picked us up and brought us home for a late dinner. 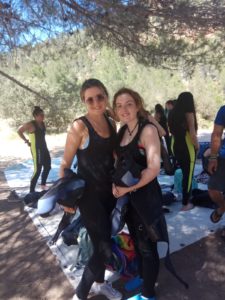 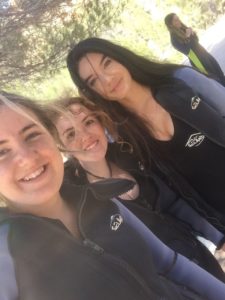